This year, Anida van der Spuy, who has been a KAMERS deli supplier from the beginning, is our KAMERS 2013 Stellenbosch Deli Coordinator. Anida has selected a delicious mix of the best of the best gourmet food traders for our deli, to ensure that there is something for everyone. She introduced us to Chef and Free Food Activist, Wynand van Rooyen, whose pop up eatery is far and away the most exciting new addition to the KAMERS deli. The Flying Boar promises to raise the bar of your KAMERS food experience.

Wynand’s love and passion for food started at a young age. He was always involved in the kitchen. As a baby he would empty drawers and climb them, just to be able to sit and watch his mom and dad cook. Growing up he also helped slaughter grass-fed cattle and sheep every year at his Grandpa’s farms on both sides of the family!

“I just started mincing meat and as we grew older I was upgraded to cutting up the carcasses with my dad and the rest of the family!” This early interaction with food and its origins has had a profound effect on how Wynand now cooks and sources his food.

Wynand is a passionate believer that we are what we eat and that we need to know the origin of all our food. He says that the connection with the farmer is critical, not only for creating award-winning dishes, but more importantly for protecting a wholesome and sustainable food system.

Wynand has won a number of prestigious awards. In October 2011 Wynand became the youngest chef ever to win the coveted title of Sunday Times Chef of the Year 2011 with his flavour-packed Jerusalem artichokes and beetroot glazed springbok loin.

Mount Nelson Hotel’s Executive Chef, Rudi Liebenberg, is particularly proud of Wynand’s achievement, as he has a long association with him since he was his student at the Prue Leith Culinary Academy. In turn, Wynand says of his Exec Chef, “I have learnt so much from him, especially his respect for food and about the precise and correct way to prepare food.”

Wynand started his career at the Saxon hotel in Johannesburg. He worked in Stellenbosch at Nice restaurant and the last three years he was Planet Restaurant’s Chef de Partie at the Mount Nelson hotel in Cape Town.

Wynand’s whole idea behind The Flying Boar, his pop up eatery at KAMERS, is to take food back to a time when we knew our farmers and used produce that was as pure and natural in origin as possible. By doing this he hopes to educate people and get them to start questioning what they are eating and where it comes from. The Flying Boar believes all food should be “free.” Free roaming, free of pesticides, preservatives and antibiotics. “Free food” is better for you and better for the planet. The Flying Boar sources sustainable, “free food” whenever possible.

Wynand asks, “How many of us know the farmer who grows our vegetables and cares for the animals we eat, or how those vegetables or meat are treated? We shouldn’t be buying meat that goes to feedlots and are fed grain, growth hormones and injected with antibiotics. Cattle where created to eat grass, not grain. We shouldn’t be buying veggies that use non-organic fertilisers and are sprayed with pesticides, that in turn poison our water systems and kill bees that pollinate over 70% of what we eat. Our entire food system is interconnected and when we manipulate or do unnatural things to that system it has massive negative consequences. Not only does the food lose flavour, nutrition and essential minerals, it also has a negative impact on our health and on the environment.” 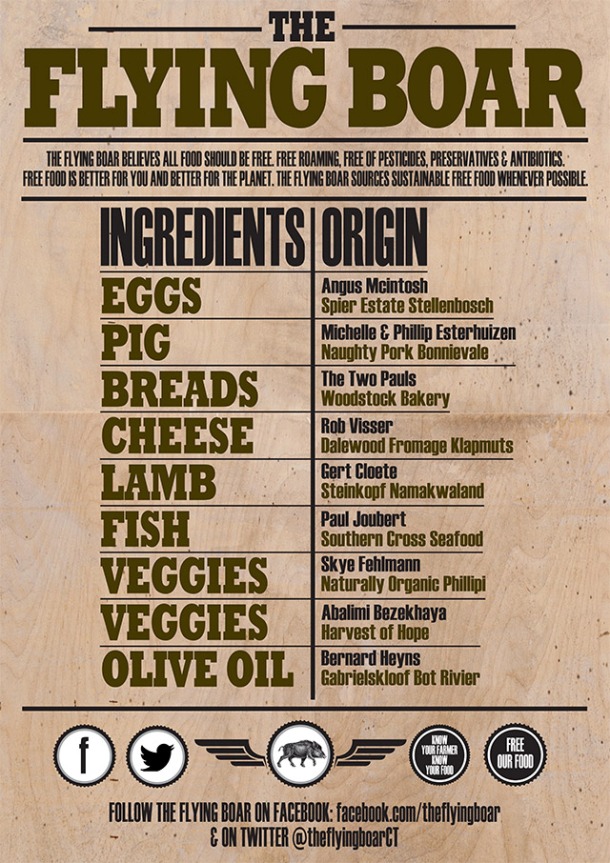 The mouth watering menu at The Flying Boar reflect Wynand’s “free food” beliefs in that all the ingredients are traceable to source. Follow The Flying Boar on Facebook where Wynand will be sharing the story of the origin of his ingredients, as well as their preparation processes.

The Flying Boar will be operating from 5-10 November at KAMERS 2013 Stellenbosch, at Weberburg Estate.

Wynand separating free roaming egg yolks, adding organic sugar and vanilla to the milk and straining burnt butter to create the delicious burnt butter ice cream in the mixer on the right.